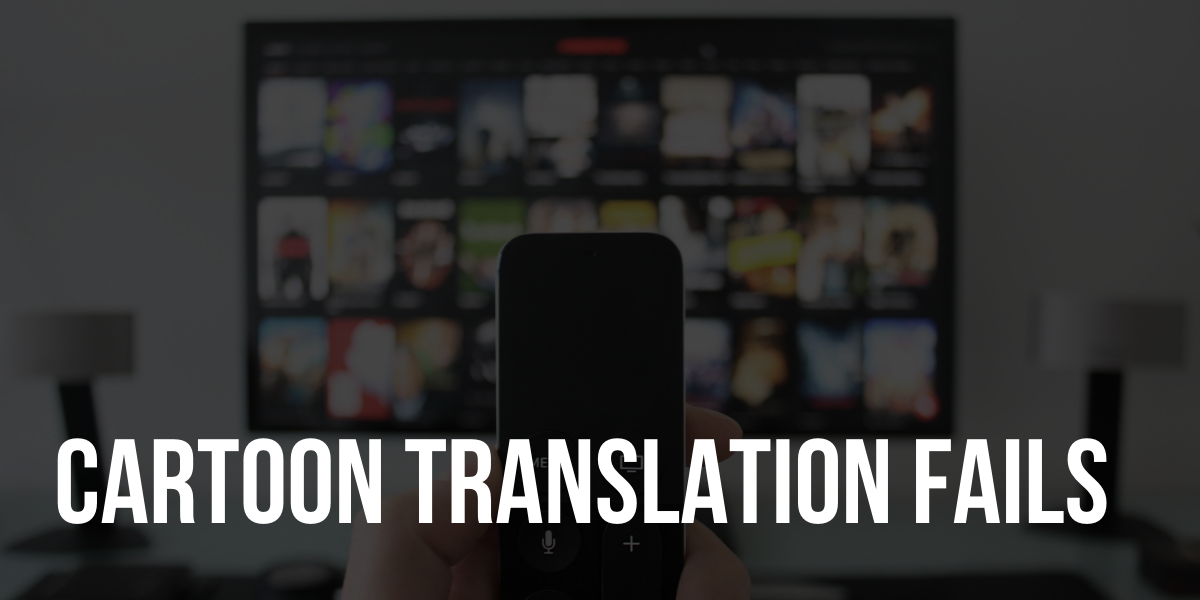 Around the world, kids (and kids at heart) have a soft spot for cartoons. However, just because animation is usually aimed at children, that doesn’t mean translating it is child’s play. Translation fails in animation can be caused by carelessness or sheer cultural differences.  In some cases, censorship or overly aggressive localization can also leave fans confused or offended.  Here are five cartoon shows that lost something in translation.

The New York Times’ Brian Feldman dubbed this feature-length cartoon “Netflix’s Worst Movie.” Now, we’re certainly not blaming the localization team completely. After all, even the best translator can’t spin straw into gold.  They have to work with the material they’re given.  From the very first scene in Leo the Lion, it’s abundantly clear that you’re not watching fine Italian cinema.

That said, the translation aspect is a mess, too. As Feldman observes, ” the subtitles for the film do not line up at all with what happens in the film. Broadly, the arcs are similar but character names, terminology and jokes are completely different.”

This movie is so bad that there’s a Tumblr devoted to cataloguing its many eccentricities. One Tumblr user observed that not only are the subtitles a completely different script from the dubbed dialogue but the subtitled dialogue also “matches up better with the lips than the current audio.”

Feldman’s theory is that the “subtitles appear to be a more literal translation of the film, its spoken audio track a localization.”

Our theory: whoever was in charge of localisation threw their hands up in the air and backed away rather than spending time making the subtitles match the dialogue, or the dialogue correspond to the characters’ lip movements.

So, the next time your little darling tells you to put on “My Little Pony: Friendship is Magic” for the umpteenth time, remember that it could be worse. Much worse.

Steven Universe and the Love That Dare Not Speak Its Name– https://youtu.be/6OWq38TikzU

Yes, “the love that dare not speak its name” is a totally outdated way to refer to a same-sex relationship.  Unfortunately for French fans of Cartoon Network’s “Steven Universe,” the show’s French translation of the song “Stronger Than You” remained stuck in the 19th century.

A quick primer in case you don’t watch the show: the main characters are intergalactic aliens named after various gemstones. They can take human form and they can “fuse” together to form new characters (Ooh, a metaphor!). The whole point of the song is that Garnet, the character singing it, is stronger than her opponent because she’s made up of two other characters (Ruby and Sapphire) who are in a loving, long-term romantic relationship.

But for the French version of the song, some lyrics were changed to make it seem like Ruby and Sapphire were “just friends.” Specifically, the line “I am made of love” was deleted and replaced by a chorus of “Ah Ah Ahs”  and “Yo ho ho’s.” Additionally, the line “I am a relationship” was changed to “I am a friendship.”

While it is important to keep cultural differences in mind during localization, it’s also important to know your audience. Steven Universe’s audience did not appreciate the censorship, and the song was redubbed after French fans protested.

In America, Transformers went off the air in 1987. In Japan, however, it kept going as Transformers: The Headmasters. Before 2011, the only English-language version available was made by the Hong Kong dubbing company Omni Productions, and it was famous for how terrible it was.

How bad was it, you ask? Here are a few samples:

That’s embarrassing enough, but then it gets worse. At one point, “Fortress Maximus,” gets translated as “Spaceship Bruce.”  So close, and yet so far away.

This popular anime series was the subject of several unfortunate translation fails. Here’s the funniest one, courtesy of TV Tropes:

Why yes, in fact, this is a children’s TV show. Why do you ask?

Of course, a series as long-running as The Simpsons is bound to have some translation errors. Here’s a funny example from the Norwegian version,  courtesy of TV Tropes:

Remember, translation fails are only funny when they happen to someone else. Whether you’re dubbing, subtitling or transcribing, if you want error-free video translations, we’re here to help! Contact us today.

As global market opportunities continue to increase in part due to the growth trend in emerging markets, companies continue to benefit from investing in global reach and product exports. As well as adhering to packaging quality control regulations, which are often not clearly defined in developing countries; companies have to pay attention to transcreation. That means they must adapt their offerings to the cultural and social customs of their customers, as well as language use and verbal expressions. This is an extremely important factor when it comes to both branding and label translation.

A Review of 5 Machine Translation Engines