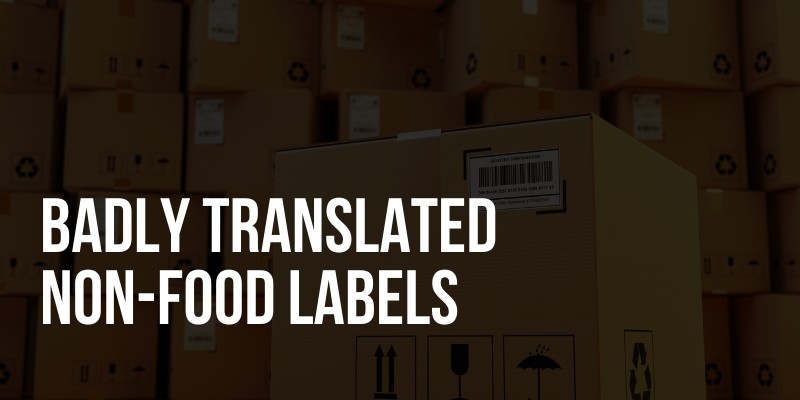 Costly translation errors can ruin the plans of businesses looking to expand into international markets. What may seem like a harmless mistake on the packaging of a product can lead to a serious PR disaster such as widespread ridicule or much worse – causing offence and outrage.

Whilst the vast majority of these glaring errors seem to apply to food packaging,  general merchandise packaging is not immune. We’ve brought together some of the worst offenders to illustrate the harm these poor translations could inflict on an otherwise respectable company.

Soap That Has Extraordinary Powers

The power of a good bar of soap has been given an altogether different dimension by this manufacturer. It’s still not entirely clear what function the soap performs, and it’s easy to see how this may cause offence in certain regions of the English-speaking world.

This translation from Arabic has left the product with some unfortunate connotations that will have undoubtedly hurt sales (if they managed to make any at all!).

Toothpaste for Those Who Hate Maths

There are those of us whose idea of a worst nightmare is having to try and solve algebra or calculus problems. Luckily, there’s now an “Anti-Calculus” toothpaste that will make all of your math related problems disappear! Or so this poor effort at translation would have you believe.

This Korean version of what appears to be Colgate is more likely to be anti-plaque than anti-algebra. But who knows, maybe they’ve discovered an untapped market of individuals who struggle with math?

*Yes, dental calculus is another word for tartar. But it’s a professional term that’s usually used by dentists instead of consumers- a good example of why a translation can be technically correct and still be wrong.

China is known as the industrial hub of the world. The country is responsible for making the majority of the Western world’s clothes, toys, and electronics to name just a few of the industries they dominate as a nation. Their faith in selling to English-speaking countries is so robust that there are now more English speakers in China than there are in the United States.

However, clearly there is still some work to do with translation skills if this label is anything to go by. It is presumed that something other than the child needs to be removed before washing but we aren’t exactly sure what. Or could it be the case that this particular manufacturer wanted English-speaking customers to avoid making that all-to-common mistake of putting their children in the washing machine along with their clothes?

Want a Body Like Jesus? We May Have the Solution!

It’s difficult to know where to begin with this poorly-translated product from Japan. First of all, it’s difficult to discern what the product even is. Does it give you a body like Jesus? Bearing the picture in mind, does it help you get to sleep? Nope, neither are correct.

In fact, this is packaging for Herbal Cinnamon Extract. With a bizarre monologue below the product name that includes lines such as, “I can lay it down because I am correct. We will not make you sorry.”, it’s an amazing feat that any English-speaking customers were able to work out what it was!

Don’t Make the Same Mistake These Companies Did!

For these companies, labelling and packaging translations were an afterthought. However, these careless translations ended up with both hilarious and offensive consequences. It’s unlikely that these products would have had any success on English speaking shelves, just because businesses tried to scrimp on professional translation services.

Fortunately, we offer professional translation services that you can rely on. Here at K International we have companies all over the world that depend on our services to make sure their product is presented correctly in international markets. Getting it wrong is simply not worth the risk.

Why not take a look at our  Labelling Translation and Compliance Services to see how we can help your company today?

As global market opportunities continue to increase in part due to the growth trend in emerging markets, companies continue to benefit from investing in global reach and product exports. As well as adhering to packaging quality control regulations, which are often not clearly defined in developing countries; companies have to pay attention to transcreation. That means they must adapt their offerings to the cultural and social customs of their customers, as well as language use and verbal expressions. This is an extremely important factor when it comes to both branding and label translation.

Around the world, kids (and kids at heart) have a soft spot for cartoons. However, just because animation is usually aimed at children, that doesn’t mean translating it is child’s play. Translation fails in animation can be caused by carelessness or sheer cultural differences.  In some cases, censorship or overly aggressive localization can also leave fans confused or offended.  Here are five cartoon shows that lost something in translation.