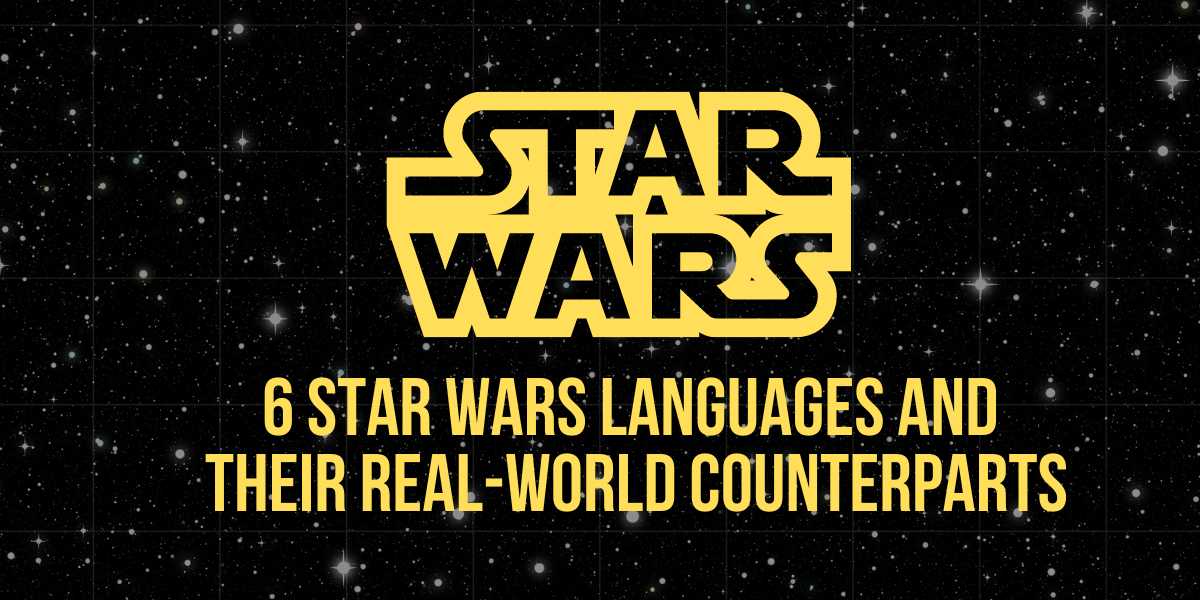 The Quechua language family is an indigenous language spoken in the South American Andes, having originally been the language of the Incas. Today it has 8.9 million native speakers, but years ago in a galaxy far, far away, it inspired the Huttese language.

Huttese even shares sounds and words with Quechua. Tuta means night in Quechua, but it means from in Huttese, as in the phrase “Sebulba tuta Pixelito.”

To create the Kanjiklubber dialogue featured in Force Awakens, director J.J. Abrams turned to Sara Maria Forsberg. Originally from Finland, Forsberg became “YouTube famous” in 2014 when her video “What Languages Sound Like to Foreigners” took off. The video featured her imitating the sound of various languages without actually speaking real words – A talent very useful for creating alien dialogue.

Forsberg was hired to create Kanjiklubber – a language which bears a strong resemblance to Indonesian:

As the Wall Street Journal notes:

“Because the actors were from Indonesia, Ms. Forsberg said that she was encouraged to base her linguistic concoction on the sounds of the national language, Indonesian, as well as of the actors’ native language of Sundanese, spoken in western Java. She studied clips of those and other Asian languages to come up with something suitably sounding. Ms. Forsberg said that she sought to create alien words that would “sound credible” and “not like gibberish.”

Lando Calrissian’s pint-sized pilot, Nien Nunb, speaks primarily Sullustan – a language that sounds like a strange mix of two African languages, Haya and Kikuyu. This is, of course, because it is exactly that

Kikuyu is a Bantu language spoken by around 6 million people in Kenya. Haya is spoken by the Haya people of Tanzania. You can hear a little bit of Kikuyu in both videos above.

Who could forget the legendary Ewokese language, with its guttural screams and primal feeling? This language is a combination of multiple languages, including Tibetan and the endangered Kalmyk Oirat language.

From The Lost Yak:

When the Ewoks pray to C3po, they are actually using a piece of Tibetan Buddhist prayer.

Kalmyk, the other main language used, is a Mongolic language spoken by the nomadic Kalmyk people of Russia. With only 80,500 native speakers, it is classified by UNESCO as “definitely endangered.” After World War II, the entire Kalmyk population was deported to Siberia and the language was forbidden to be taught in school. In was not until the 1980s that the language was given co-official status with Russian in Kalmykia and efforts began to revive it.

In The Phantom Menace’s pod-racing scene, Anakin’s owner Watto and competitor Sebulba inexplicably speak back and forth in Finnish, saying “Kiitos!” (Thank you!) and “Ole hyvä!” (You’re welcome!)

I’m not quite sure what language they were supposed to be speaking, given that the two aliens come from different planets altogether. But hey, most movies could be improved with a bit of gratuitous Finnish.

“You would want a language that has a relatively small native speaker community and that would still be documented well enough to have accessible resources and grammatical and lexical descriptions,” Ivaska said. “Finnish all of a sudden is not such a bad bet.”

What’s your favorite alien language in Star Wars? Let us know in the comments!